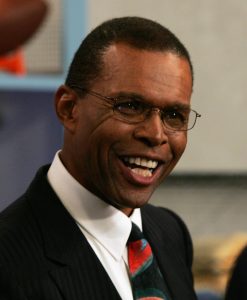 Football great, Gale Sayers, was born on May 30, 1943 in Wichita, Kansas. Known as “The Kansas Comet”, Sayers is a retired NFL player who spent his entire career with the Chicago Bears.

Gale Sayers burst upon the pro football scene in 1965 with the kind of an impact that the sport had not felt in many years. It is difficult to imagine a more dynamic debut than the one he enjoyed as a rookie. In his first heavy pre-season action, he raced 77 yards on a punt return, 93 yards on a kickoff return, and then startled everyone with a 25-yard scoring pass against the Los Angeles Rams.

In regular season, he scored four touchdowns, including a 96-yard game breaking kickoff return, against the Minnesota Vikings. And, in the next-to-last game, playing on a muddy field that would have stalled most runners, Gale scored a record-tying six touchdowns against the San Francisco 49ers. Included in his sensational spree were an 80-yard pass-run play, a 50-yard rush and a 65-yard punt return. For the entire season, Gale scored 22 touchdowns and 132 points, both then-rookie records.

Quiet, unassuming, and always ready to compliment a teammate for a key block, Sayers continued to sizzle in 1967 and well into the 1968 season. Then, in the ninth game, Sayers suffered a knee injury that required immediate surgery.

After a tortuous rehabilitation program, Gale Sayers came back in 1969 in a most spectacular manner, winding up with his second 1,000-yard rushing season and universal Comeback of the Year honors. But injuries continued to take their toll and, just before the 1972 season, Gale finally had to call it quits.

In his relatively short career, Sayers compiled a record that can never be forgotten. His totals show 9,435 combined net yards, 4,956 yards rushing, and 336 points scored. At the time of his retirement he was the NFL’s all-time leader in kickoff returns. He won All-NFL honors five straight years and was named Offensive Player of the Game in three of the four Pro Bowls in which he played.

Gale Sayers’ friendship with teammate Brian Piccolo, and Piccolo’s struggle with cancer (embryonal cell carcinoma, a type of cancer, found as a large tumor in his chest cavity which would eventually result in his death), became the subject of the made-for-TV movie Brian’s Song. The movie, in which Sayers was portrayed by Billy Dee Williams in the 1971 original, and by Mekhi Phifer in the 2001 remake, was adapted from Sayers’ own telling of this story in his 1971 autobiography I Am Third.

A notable aspect of Sayers’ friendship with Piccolo, a white man, and the first film’s depiction of their friendship, was its effect on race relations. The first film was made in the wake of racial riots and charges of discrimination across the nation. Gale Sayers and Piccolo were devoted friends and deeply respectful of and affectionate with each other. Piccolo helped Sayers through rehabilitation after injury, and Sayers was by Piccolo’s side throughout his illness.