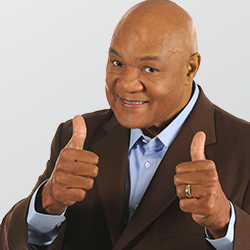 George Foreman is a retired professional boxer. Foreman was originally interested in football, but he gave it up for boxing. Foreman dropped out of school at 15 years old, he later joined the Job Corps and began to train in boxing. Foreman won a gold medal in the boxing/heavyweight division during the 1968 Mexico City Olympic Games. In his amateur career, Foreman had a record of 22-4. In 1969, Foreman turned professional. In his boxing career, Foreman has fought in 81 fights and he has won 76 of them. Foreman had retired twice from boxing, and he acknowledged his comeback was due to the success of his healthy eating. This made him the perfect fit for Russell Hobbs, Inc. who was looking for a spokesperson for their fat-reducing grill. Foreman had some influence on the making of the George Forman Grill and over 100 million units have been sold. Foreman is also an author and ordained prime minister.