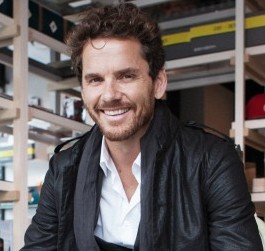 Graham Hill is one of the world’s leading figures at the intersection of entrepreneurialism, innovation and sustainability. Named one of Fast Company’s “100 Most Creative People in Business” and featured on the cover of Inc. Magazine, Hill is sought after for his ability to clearly communicate how we can all create a simpler, wealthier, greener and happier planet. He has presented at many prestigious conferences around the world including the main TED Conference in both 2009 and 2011.

Hill’s background includes helping found one of the earliest Internet consultancies, SiteWerks, which he and his co-founder built to sixty people before selling to Bowne in 1998. In 2004, Hill founded the groundbreaking website TreeHugger.com, which married environmentalism with the then-nascent blogging platform. The site remains one of the web’s top eco design and news sites and was instrumental in bringing the sustainability conversation into the mainstream.

After selling Treehugger to Discovery in 2007, Hill founded LifeEdited, a real estate design, marketing and development firm focused on delivering a new breed of home that packs big function into small spaces. The company launched with its prototype apartment; the innovative, crowd-sourced design featured transforming furniture, a moving wall and home automation, which gave the 420 square foot space the function of an apartment twice its size. LifeEdited’s “less is more” philosophy, combined with pragmatic, real-world design, business and lifestyle solutions, received an incredible public response. In addition to the 2.5M view 2011 TED talk on the topic, Hill and LifeEdited have been featured in the New York Times, New Yorker, Dwell, Wired, Daily Mail, Gizmodo, CNN, NPR, Today Show as well as a top read/emailed NY Times Op Ed called “Living with Less. A lot Less.” Videos featuring Hill and LifeEdited have been viewed tens of millions of times, making the prototype apartment one of the most recognized apartments in the world. Besides LifeEdited, Hill runs We Are Happy to Serve You, a company that makes a ceramic version of the iconic New York paper coffee cup.

Hill is a dynamic, seasoned and professional presenter, having spoken at innumberable venues across the globe. He is as adept at addressing small corporate events as he is packed houses at universities, and can speak with authority on a number of topics including building around, and preparing for, a post-consumer economy, finding more happiness with less stuff and creating healthy relationships with technology.