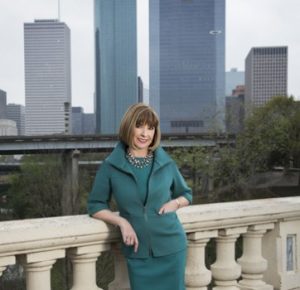 Helen Perry was born the 7th of 8 children in Houston, TX. By the time she strolled into the family, so many roles had already been assumed, that Helen became ‘The Funny One.’ She won the talent show in junior high for her impersonation of Ladybird Johnson and pulled pranks on substitute teachers using various accents, having them convinced she was a foreign exchange student. When it came time to declare a major at Louisiana State University, Helen shrugged her shoulders and checked ”Speech.” That proved to be a very fortuitous move. She is frequently quoted in publications such as The Houston Chronicle, USA Today, and The Wall Street Journal. Her unique use of humor places her training sessions in the distinct category of Edutainment, leaving her audiences both educated and entertained. Her outrageous comedy characterizations include Meme Narcissus, a legend in her own mind, Anita Mo Taste, the most over-accessorized beauty consultant in Dimebox, TX, Boom Boom Insalate, Italian Bombshell from Queens, NY and Martha Stewpot, compulsive expert on everything. Ms. Perry has appeared at The Venetian Room, Fairmont Hotel-Dallas, Ovations-Houston, River Oaks, SugarLand, Sweetwater, Lakeside, Victoria and Houston and River Oaks Country Clubs, Dillard’s, Neiman Marcus, Tiffany & Company, Martha Turner Properties, Cattle Baron’s Planning Committee Convention, Enron-U.S. and India, Shell, Sterling McCall Toyota, Andersen Consulting, Merrill Lynch, Deloitte & Touche and The Woodlands Conference Center. She is frequently accompanied by talented pianist, Joey Boesch performing original and hilarious lyrics to familiar tunes we all know and love. Recent quotes: ”Thank you for making my installation dinner such a memorable occasion. You and Joey were delightful!” -Dr. Ron Auvenshine, President, Greater Houston Dental Society ”Whether on a TV interview, a keynote address or as a featured comedienne, Helen is always on target a pro.” -Kathie Turner, Television/News Personality ”Hilarious, delightful-incredible timing!” -Linda Reneburg, John Daugherty Realtors ”Her distinctive sense of style and outrageous humor leave her audiences laughing hysterically and begging for more!” -Sandi Denenburg, Continental Airlines