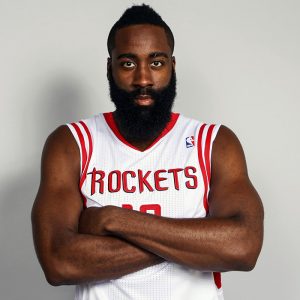 James Harden was born August 26, 1989 and is a professional basketball player who plays for the Houston Rockets of the National Basketball Association (NBA). He was a first-time All-Star in 2013, his first season with the Rockets. He was named NBA Sixth Man of the Year with the Oklahoma City Thunder in 2012.

Harden played college basketball for the Arizona State Sun Devils, where he was named a consensus All-American and Pac-10 Player of the Year in 2009. He was selected third overall by Oklahoma City in the 2009 NBA Draft. He became a key part of a young core of players led by Kevin Durant and Russell Westbrook. Together, the team reached the 2012 NBA Finals, where they lost to the Miami Heat. Harden was then traded to Houston and became the cornerstone of the Rockets franchise.

Harden was also selected, along with Durant and Westbrook, to be a part of United States national team for the 2012 Summer Olympics, where they won the gold medal.