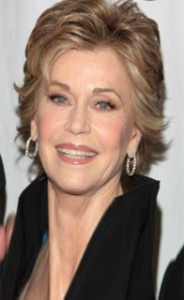 Jane Fonda is one of the top speakers on the circuit today. She was born in New York City to legendary screen star Henry Fonda and New York socialite Frances Seymour Brokaw. From the beginning, Jane Seymour Fonda was destined to an uncommon and influential life in the limelight.

Although she initially showed little inclination to follow her father’s trade, she was prompted by Joshua Logan to appear with her father in the 1954 Omaha Community Theatre production of ‘The Country Girl’. Her interest in acting grew after meeting Lee Strasberg in 1958 and joining the Actors Studio. Her screen debut in Tall Story (1960) marked the beginning of a highly successful and respected acting career highlighted by 2 Academy Awards for her performance in Klute (1971) and Coming Home (1978) and 5 Oscar nominations for Best Actress in: They Shoot Horses, Don’t They? (1969), Julia (1977), Morning After, The (1986) and On Golden Pond (1981) which was the only film she made with her father.

Jane Fonda’s professional success contrasted with her personal life, often laden with scandal and controversy. Her appearance in several risqué movies (including Barbarella (1968) by then husband Roger Vadim was followed by what was to become Jane Fonda’s most debated and controversial period: her espousal of anti-Establishment causes and especially her anti-War activities during the Vietnam War. Her political involvement continued with fellow activist and husband Tom Hayden (I) in the 70s and early 80s.

In the 80s Fonda started the aerobic exercise craze with the publication of the “Jane Fonda’s Workout Book”. She married to broadcasting Czar Ted Turner (I) in 1991.

Today Jane Fonda addresses many audiences on a variety of subjects including: Motivation, Health and Wellness, Business, Women’s Issues and a host of pertinent topics.