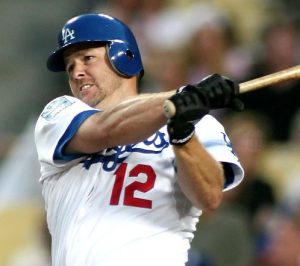 Jeff Kent was the National League’s starting second baseman in the 2005 All-Star Game at Detroit’s Comerica Park. Jeff Kent ranks eighth in club history in batting average (minimum 1,800 AB), while also placing among franchise leaders with 73 home runs as a second baseman (third) and 497 games played at second base (fifth). Jeff Kent was the National League Most Valuable Player in 2000, when he hit .334 with 33 homers and 125 RBI with the Giants. Jeff Kent is a four-time Silver Slugger Award winner for NL second basemen, and is a five-time All-Star (1999-01, 2004-05), including four starts in the Mid-Summer Classic. Jeff Kent played in the postseason seven times, including one World Series with the Giants in 2002.