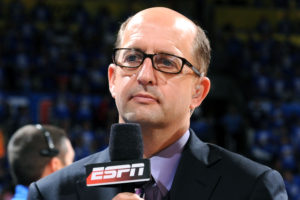 Jeff Van Gundy began his basketball coaching career at McQuaid Jesuit High School in Rochester, New York. The following year, he became a graduate assistant under Rick Pitino at Providence College, helping the Friars advance to the Final Four. In his second season at Providence, he was promoted to assistant coach under Gordon Chiesa. The next season, Van Gundy became an assistant coach under Bob Wenzel at Rutgers.

On July 28, 1989, Jeff Van Gundy became assistant coach for the New York Knicks. The next six-and-a-half seasons would be spent providing support to Stu Jackson (1989-1990), John MacLeod (1990-1991), Pat Riley (1991-1995) and Don Nelson (1995-1996). The Knicks never finished lower than third in the Atlantic Division, won three division titles, and qualified for the playoffs in every year of his tenure as an assistant coach. The Knicks would advance to the Eastern Conference Finals in 1993 and the NBA Finals vs. the Houston Rockets in 1994.

From March 8, 1996 to his resignation on December 8, 2001, Jeff Van Gundy was the head coach of the New York Knicks. He led the Knicks to the playoffs six times, including an appearance in the 1999 NBA Finals. He is the brother of Orlando Magic head coach Stan Van Gundy.

Jeff Van Gundy was hired by the Rockets in 2003. On May 18, 2007, Van Gundy was fired from his position as head coach of the Houston Rockets after their seven-game first-round playoff loss to the Utah Jazz. Later that night, Van Gundy was a guest analyst for ESPN’s broadcast of the Utah Jazz-San Antonio Spurs game in San Antonio, Texas and has since helped cover the playoffs for ESPN in the broadcast booth.