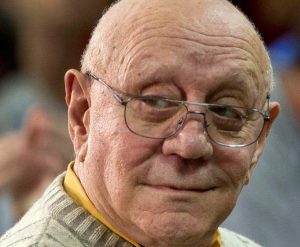 Jerry Tarkanian was one of the most colorful and successful college basketball coaches of his generation. He has the distinction of having coached three different Division I basketball teams and holds a 990-228 career coaching record at the collegiate level (81).

Tarkanian’s coaching career lasted 43 years, including stints at Long Beach State (1962-1973), the University of Nevada Las Vegas (1973-1992), and Fresno State (1995-2002). In 1991, Tarkanian lead UNLV to an NCAA Division I Championship, setting a record for margin of victory in a championship game. More than 40 of Tarkanian’s players have gone on to play professionally in the NBA.

He established a basketball school in Las Vegas, the Tarkanian Basketball Academy, which aims to help youth by providing positive role models in an effort to prevent drug and alcohol problems. Since retirement,Tarkanian has published a popular autobiography, “Runnin’ Rebel: Shark Tales of Extra Benefits, Frank Sinatra, and Winning It All,” in which he shares experiences of his colorful career.

Tarkanian was born August 8, 1930, and graduated from Fresno State in 1955. He played basketball for the Bulldogs for two seasons and later received a master’s degree in educational management from the University of Redlands.