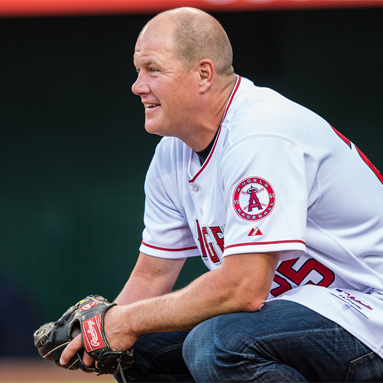 Jim Abbott has battled the odds his entire life. Despite being born with only one hand he was the 15th player to ever make a professional debut in the Major Leagues. Many considered the move a publicity stunt by manager Doug Rader, but after struggling early, Abbott proved his doubters wrong by winning 12 games with a 3.92 ERA in his rookie season.

On the mound, Abbott wore a right-hander’s fielder’s glove at the end of his right arm. While completing his follow-through after delivering a pitch, he rapidly switched the glove to his left hand so he could handle any balls hit back to him. In that first 1989 season as a professional he won more games as a rookie than any other previous player without Major League experience.

Abbott went to the University of Michigan on a baseball scholarship. Abbott led the Wolverines to Big Ten titles in his freshmen and junior years and won the prestigious Golden Spikes Award, presented annually to the outstanding college baseball player in the United States.

Abbott participated in the 1988 Summer Olympic Games and led the United States to its first-ever Gold Medal with a 5-3 victory over Japan.

He then joined the California Angels following the Olympics. Jim made his pro debut in spring training and made it to the Major Leagues without playing in the minor leagues, which was the beginning of a tremendous Major League career. His most famous highpoint is perhaps throwing a no-hitter for the New York Yankees at Yankee Stadium in 1993.

Today, Abbott is a sought-after motivational speaker. He uses sports stories of how he overcame adversity along with anecdotes from his life.