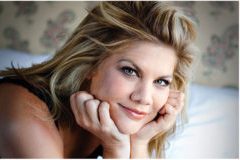 Kristen Johnston is an American stage, film, and television actress. She may be most famous for her role as Sally Solomon in the television series 3rd Rock from the Sun. She also starred as Wilma Flintstone in the prequel to the live-action movie adaptation of The Flintstones animated series. Kristen Johnston is also known for her tall 6′ frame and relatively deep voice for an actress.