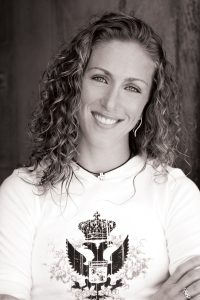 Laura Wilkinson first leap of faith from the 10 meter platform was at the age of 15. After being told by one of her teachers that she was too old to start a new sport, Laura plunged into diving anyway. Nine months later, she was kicked off of her high school diving team for being a “waste of space.” The following year, Laura won her first US National Title, made the US National Team, and earned a bronze medal at the World Cup.

Laura overcame great obstacles to win her first major international gold medal, the 1998 Goodwill Games. She is the only American diver to ever win a gold medal at this prestigious
competition. In 1999 after winning her second NCAA Division 1 title, Laura left her college scholarship behind to return home to chase her Olympic dream.

Shortly before the 2000 Olympic Trials, Laura shattered her right foot in a training accident. But with a persevering heart, she was not deterred by this injury. Together, Laura and her coach, Kenny Armstrong, designed unique training methods to utilize the mental aspects of diving to keep Laura’s “head in the game.” She had just three weeks back in the water to physically train prior to the Olympic Trials. The mental training began to pay off when Laura won the Trials making her first Olympic Team. Three months later, while wearing a protective shoe to walk up the ladder to the platform, Laura made history in Sydney, Australia.

Beating what many said were impossible odds in one of the biggest upsets in Olympic history, Laura, starting in eighth place and with a broken foot, came from behind to win the 2000
Olympic platform gold medal.

Laura has also won the 2004 World Cup and the 2005 World Championships, becoming the first woman in history to win all three coveted world titles in platform diving. Along the way, she has won 19 US National Titles, been voted by the American public the 2000 US Olympic Spirit
Award winner and was nominated for an ESPY award.

People always notice something that sets Laura apart from her competitors, her smile. She smiles during the most pressure packed and fierce competitions, almost like she’s removed
from the situation, acknowledging her family and teammates in the stands. Laura explains, “I smile because I love what I do. I make a commitment before the competition to enjoy the experience however it turns out.”

Today Laura enjoys sharing her story on stage with many different themes and lessons always woven into her Olympic journey. She has also done color commentary for the sport of diving
with several networks covering events from collegiate conference championships to Olympic Trials to the Youth Olympic Games to the World Series. Laura also had the opportunity to work at the 2012 London Olympic Games interviewing Olympic athletes and their moms for P&G and NBCOlympics.com.

Laura is married to her husband, Eriek, and is Mommy to three amazing children by birth and adoption. She enjoys writing about her adventures in parenting on her blog
(www.laurawilkinson.com/blog/).