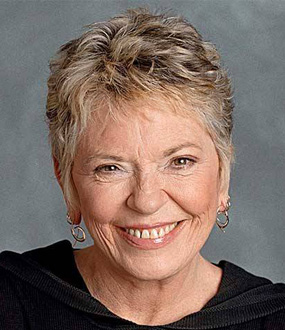 Linda Ellerbee began her career at CBS, and then moved to NBC News where, after years covering national politics, she pioneered the late-night news program NBC News Overnight, which she wrote and anchored. Overnight was cited by the duPont Columbia Awards as “the best written and most intelligent news program ever.” In 1986, Linda Ellerbee moved to ABC News to anchor and write Our World, a weekly primetime historical series. Her work on Our World won her an Emmy.

In 1987, Linda Ellerbee and Rolfe Tessem, her partner, quit network news to start Lucky Duck Productions, first producing documentaries for PBS. In 1991, Lucky Duck began producing Nick News for Nickelodeon with Linda Ellerbee writing and hosting. Nineteen years later, Nick News is watched by more children than watch all other television news shows put together- and has earned honors traditionally associated with adult programming. Known for the respectful and direct way it speaks to children about the important issues of our time, Nick News has collected three Peabody Awards (including one personal Peabody given to Ellerbee for her coverage of the Clinton investigation), a duPont Columbia Award and seven Emmys, including this year’s Emmy for Outstanding Children’s Programming, given for Coming Home: When Parents Return From War given in the category of Outstanding Children’s Programming. Coming Home made history when it was given the prestigious Edward R. Murrow award for best network documentary – not a kids’ category – and the first time ever that a kids’ show won that award.

These days, Linda Ellerbee and her work can be seen all over the television universe. Lucky Duck has and continues to produce primetime specials for ABC, CBS, HBO, PBS, Lifetime, MTV, Logo, A&;E, MSNBC, SOAPnet, Trio, Animal Planet and TV Land, among others. Linda Ellerbee was honored with an Emmy for her series, When I Was a Girl, which aired on WE: Women’s Entertainment network.

Linda Ellerbee’s first foray into books for kids, an eight-part fiction series entitled Get Real, published in 2000, won her raves among middle school readers. Both of Ellerbee’s previous adult books -And So It Goes, a humorous look at television news”, and Move On, stories about being a working single mother, a child of the ’60s and a woman trying to find some balance in her life-have been national best sellers. Linda Ellerbee’s recent book, also a best seller, Take Big Bites: Adventures Around the World and Across the Table, a tribute to her love of travel, talking to (and eating with) strangers, and, according to Ellerbee, “oh, just making trouble in general.”

As a breast cancer survivor, Linda Ellerbee travels thousands of miles each year giving inspirational speeches to others. She is as direct with women as she is with kids they understand that she understands their lives.

Although Linda Ellerbee has won all of television’s highest honors, she says it’s her two children who’ve brought her the richest rewards. Ellerbee spends her personal time in New York City and Massachusetts with Rolfe, her partner in work and life and their dogs, Daisy and Dolly.