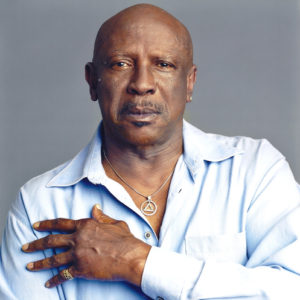 Lou Gossett, Jr. remains one of the most sought after and busiest veteran actors in the film and television industry today. His unique talent for portraying powerful and charismatic characters has charme audiences worldwide, resulting in an impressive amount of coveted awards, including an Oscar, Emmy, and Golden Globe.

Gossett captured an Emmy, television’s highest honor, in 1977 for his compelling portrayal of “Fiddler” in the historic television mini-series, Roots. He electrified the screen in 1982 with his unforgettable portrayal of a relentless military sergeant in the hit film An Officer and a Gentleman, earning him the ultimate acting honor, an Academy Award for Best Supporting Actor. Gossett struck gold again in 1992 for his poignant work in HBO’s The Josephine Baker Story, and garnered a Golden Globe. Even in a guest-starring role for the popular CBS series Touched by an Angel, Gossett’s work was singled out and he received the 1998 NAACP Image Award.

His passion for his work is matched only by his strong belief in helping others by giving back to the community. He serves as a spokesperson and a behind the scenes leader for many charitable organizations.

Gossett also developed a nonprofit foundation, The Eracism Foundation, with the aim of developing and producing entertainment that brings awareness and education to issues such as racism, ignorance, and societal apathy.

Gossett first gained recognition in the New York theatre scene where, at the age of 16, he won a Donaldson Award for Best Newcomer, beating out a young James Dean. Soon he was offered a prestigious Broadway role opposite Sidney Poitier in A Raisin in the Sun and went on to star in the film version, paving the way for a long and rewarding career.

Recently, Gossett received an NABOB Pioneer in Entertainment Award, a Community Advocates Award from St. Vincent de Paul Council of Los Angeles, and the American Legacy Men of Honor and Distinction Awards from Legacy magazine. He has also received two Lifetime Achievement Awards, one from the Palm Beach International Film Festival and another from the 14th Annual African American Marketplace.Gossett’s new memoir is entitled An Actor and a Gentleman.