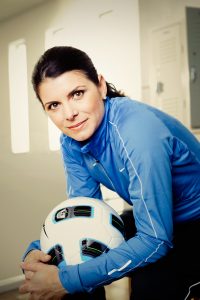 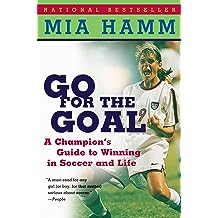 Mia is widely recognized as the world’s best all-around women’s soccer player. In Atlanta at the 1996 Centennial Olympic Games she proved it by leading her team to Team Gold in front of 80,000 screaming fans in Athens, Georgia. Never in history had so many spectators come out to watch a women’s sporting event. The Games highlighted female athletes like no other time in modern history and Mia emerged as one of the Game’s true examples for people of all ages who have a dream and go for it. The 1999 Women’s World Cup, where the USA took home the championship in front of 40 million viewers in this country alone, sold over 650,000 tickets, including sellouts at Giants Stadium and the Rose Bowl. There is no stopping women’s soccer and Mia’s enormous impact, both on and off the field.
Mia played collegiately at UNC and led her team to four consecutive NCAA championships. Her awards and accomplishments only tell part of the story of this remarkable athlete she gives much of her precious free time to charitable causes and strives, in anything she does, to promote women’s athletics, the sport of soccer, and a feeling of confidence and sense of purpose in young people.
Mia was the youngest player ever to play for our National Team (age 15) and retired in 2004 after 17 years, 2 World Championships, and 2 Olympic Gold medals. Her records in appearances and goals, MVP awards and overall performance put her at the top of the sport. In April of 1999, Nike named the largest building on its corporate campus after Mia.
Having seen the enormous support her and her teammates received at the ’96 and ’00 Games, Mia became a founding member of the Women’s United Soccer Association and led the Washington Freedom to the Founder’s Cup. Poised, articulate and honest, Mia is a pioneer in her sport and a role model for athletes and fans alike who believe in equal opportunity, Title IX legislation, and the love of the game.