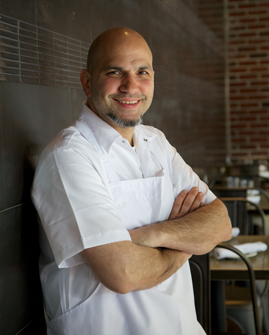 Most Celebrated Greek Chef in America 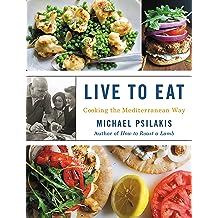 Michael Psilakis has acquired many of the food world’s highest honors since hitting the New York City culinary scene about a decade ago and now has a 7-venue restaurant group under his belt including four locations of MP Taverna, his modern interpretation fo a traditional Greek tavern, Kefi & FISHTAG on the Upper West Side and The Hall at MP, a live music venue in Williamsburg.

In 2008 alone, Psilakis was awarded Food & Wine’s Best New Chef and Bon Appetit’s Chef of the Year distinctions; nominated for A-List Chef by Bravo TV; and had his upscale Greek restaurant, Anthos, nominated for a James Beard Award in the category of Best New Restaurant. He was also named “Chef of the Year” by Esquire Magazine and his restaurant Anthos was awarded a Michelin star and named the third of ten best new restaurants by The New York Times restaurant reviewer, Frank Bruni.

A tremendous cook, the chef’s mother taught him everything about the flavors and techniques of classic Greek cooking and remains his greatest influence in the kitchen. “Even today, the flavors of my dishes are my mother’s flavors,” says Psilakis. “And my instincts for taking Greek cuisine in new directions—these I’ve inherited from her.”

In college he earned a BBA in accounting and finance as per his father’s wishes, but after found work as a waiter at T.G.I. Fridays, where the possibilities of a career in restaurant management first became apparent. Later he worked his way up the ranks at Café Angelica, a trattoria on Long Island, and eventually bought out the owners. Psilakis renamed it Ecco and established himself as a bona fide restaurateur.

Psilakis ran the front-of-house at Ecco for two years until one day when his chef and cook simply didn’t show. With reservations pending that evening, Psilakis stepped into the kitchen. This moment of crisis allowed his innate and indisputable talent as a chef to finally be revealed. One year later, with Psilakis in the kitchen, Ecco received a two-star rating from The New York Times.

The opening of his next venture Onera on Manhattan’s Upper West Side allowed Psilakis to realize a longtime dream and return to the cuisine that first ignited his passion for cooking. The unique upscale Greek-inspired cuisine he served at Onera earned him a reputation as a rising culinary star.

In 2006 he joined restaurateur Donatella Arpaia to open Dona restaurant, where he served First Generation cuisine—food that blended their modern American experiences with the cuisines of their parents’ Mediterranean homelands of Italy and Greece. The restaurant received two stars from The New York Times and was named one of Esquire’s Best New Restaurants in 2006.

Already in the works were plans for the two to bring new additions to the New York dining scene. Psilakis transformed Onera into Kefi, a rustic cozy neighborhood spot serving the Greek food he ate as a child. He moved his upscale Greek cooking from Onera to Anthos in midtown. Meaning rebirth or blossoming, Anthos featured Psilakis’ signature Greek cuisine and has also earned numerous accolades. The restaurant was awarded a coveted Michelin Star, being one of only three Greek restaurants in the world to hold that honor, and was nominated for a James Beard Award in 2008.

In July 2009, Psilakis opened Gus & Gabriel, a gastropub honoring the two most influential men in his life, his late father Gus and four-year-old son Gabriel. This restaurant opened in the space on 79th Street that has served as an incubator for concepts Onera and Kefi. In the same space, Psilakis opened FISHTAG, a wine bar meets seafood restaurant.

Little, Brown published Psilakis’ first cookbook, How to Roast a Lamb, in October 2009. It has since gone on to win countless awards such as the Gourmand World Cookbook Award for Best Foreign Cuisine. In January of 2017 Psilakis, in collaboration with Little, Brown once more, will publish his second cookbook Live to Eat; Cooking the Mediterranean Way. This book pulls the veil back on how he and his wife Anna split the prep and cooking duties during the week to ensure their family is able to live the Mediterranean lifestyle he grew up with, even when faced with today’s crazy scheduling demands.

Psilakis opened the first of four MP Taverna restaurants in May 2011 in Roslyn, NY followed by a second location in Irvington, NY a year later. In April 2013 he opened the third restaurant in the historic Hellenic epicenter of Astoria, Queens and in May 2015 he took the brand on the L train with an expansive MP Taverna landing in Williamsburg, two blocks from McCarren Park.  At this location he also branched out into the live music scene with the opening of The Hall at MP, a 5,000 square foot live music and event space next door to MP Taverna.

Psilakis was the Co-Executive Producer and Co-Star of BBC AMERICA’s original adventure cooking competition series, No Kitchen required, which premiered in April 2012. The show followed three chefs as they were dropped into the most exotic and remote places on Earth.

Psilakis has appeared on “TODAY” show, “Good Morning America,” “Live with Kelly,” as well as in numerous publications including The New York Times, Men’s Health, and Food & Wine magazine.