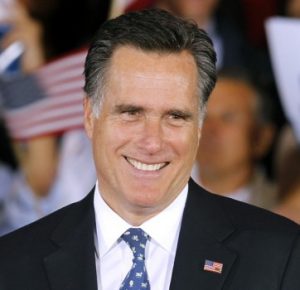 The son of a former governor of Michigan, Mitt Romney was born and raised in Bloomfield Hills, Michigan. He received his undergraduate degree from Brigham Young University, and later graduated with a prestigious Juris Doctor/Master of Business Administration joint degree from the top-ranked Harvard Law School and Harvard Business School. After earning this degree, Romney entered in a role for management consulting mogul Bain & Company where he eventually rose to CEO leading the company through turmoil through hard times to continue to preserve the prestige the firm has acquired. Romney entered the management consulting business, which led to a position at Bain & Company, where he eventually served as CEO and brought the company out of crisis. Mitt Romney later spun-off a company Bain Capital, a highly-profitable private equity firm. Turning his focus from business, he ran as a Republican candidate in the 1994 Senate election in Massachusetts where he fell to incumbent Ted Kennedy. Mitt Romney later presided as the President of the 2002 Winter Olympics in Salt Lake City and served as CEO of the Salt Lake Organizing Committee.

Capitalizing on these successes and experiences, Romney was able to successfully win election as governor of Massachusetts in 2002 where he served one term and declined to seek reelection in 2006. He was successful in eliminating a $3 billion deficit and a massive health care reform bill which was the first of its kind in the U.S.

Mitt Romney was unsuccessful in his run for the Republican presidential nomination losing out to John McCain who himself went on to fall in the general election to President Barack Obama. Romney followed this setback with a book No Apology: The Case for American Greatness. He also lent his support for other Republicans by giving speeches and working in fundraising efforts. Currently, Romney is one of the front-runners in the 2012 Republican presidential nomination campaign. Mitt is available for speaking engagements, endorsements, and personal appearances.