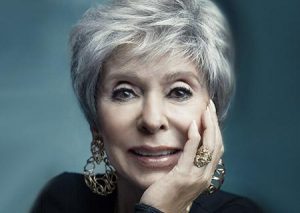 In addition to film, stage, television, and concert commitments, Rita Moreno fills her spare time by lecturing to various organizations and university audiences on such varied topics as The Value of Diversity to our Culture, The Power of Language, Getting Older without Getting Old and A History of the Arts in Film TV & Theatre. She is also involved with a number of civic and charitable organizations and events.

At a White House ceremony in June 2004, Moreno was awarded the Presidential Medal of Freedom by President George W. Bush. The medal is the highest honor bestowed upon a civilian and ranks only second to the Congressional Medal of Honor as the nation’s highest award. It is conferred on individuals for a lifetime of meritorious service.

In 2007, Rita Moreno was inducted into the California Hall of Fame by Governor Arnold Schwarzenegger. In 2010, she was awarded the National Medal of Arts by President Barack Obama, as well as the Here I Stand Award for activism in the arts and the HOLA Lifetime Achievement Award.