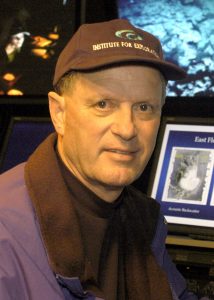 Oceanic Researcher Who Discovered the Wreckage of the Titanic

Born June 30, 1942, in Wichita, Kansas, Robert Ballard grew up in San Diego, California. He earned a Ph.D. in marine geology and geophysics from the University of Rhode Island’s Graduate School of Oceanography, where he is currently a full-time faculty member. He spent 30 years at Woods Hole Oceanographic Institution (WHOI) in Massachusetts, where he spearheaded the development of manned submersibles and remotely operated vehicles for marine research. While at WHOI he founded the Deep Submergence Laboratory.

In 1989, Dr. Ballard created the JASON Project, an educational program designed to inspire in students a lifelong passion to pursue learning in science, math and technology through exploration and discovery. Ballard would later develop telecommunications technology to create “telepresence” for his JASON Project, which today allows hundreds of thousands of school children to accompany him from afar on undersea explorations around the globe. Dr. Robert D. Ballard is President of the Institute for Exploration at Mystic Aquarium in Mystic, Connecticut and Director of the Institute for Archaeological Oceanography at the University of Rhode Island’s Graduate School of Oceanography. He is best known for his 1985 discovery of the Titanic.

Throughout his career Ballard has conducted more than one a hundred deep-sea expeditions, using both manned and unmanned vehicles. Beginning in 1973, Ballard participated in his first international expedition, Project FAMOUS (the French-American Mid-Ocean Undersea Study). This was the first manned exploration of the Mid-Ocean Ridge which helped to confirm the newly emerging theory of Plate Tectonics and won wide acclaim within the oceanographic community. In 1975, Ballard conducted an expedition to the Cayman Trench where he recovered unusual rocks that helped scientists better understand the internal composition of the Earth’s crust. In 1977, Robert Ballard was Co-Chief Scientist of the Galapagos Rift expedition that discovered hydrothermal vents and their exotic ecosystems based on â€œchemosythesis.â€ By 1979, Ballard was scientist in charge of the ANGUS exploration program on the East Pacific Rise that discovered the first â€œBlack Smokers,â€ a discovery that helped for the first time to explain the chemistry of the world’s oceans. The smoking chimneys were actually towers of almost pure crystalline zinc sulfide, which created a mineral rich environment to support unique evolutionary variants of common fish and snails.

In 1982 Ballard organized the Deep Submergence Laboratory (DSL) at the Woods Hole Oceanographic Institute to begin developing the sophisticated remotely operated vehicle system known as Argo-Jason â€“ a deep-towed vehicle carrying sensitive video cameras connected to the surface by fiber-optic cable through which broadcast quality images could be transmitted. Developed with support of the navy and tested in 1984, Robert Ballard would use this system for his best-known expedition, the discovery of the RMS Titanic.

In August of 1985, Ballard as chief scientist conducted a joint French-American expedition to find the Titanic. Using the newly tested Argo, Ballard began by searching for the debris field in an area just south of where Titanic’s lifeboats were found by the Carpathia. Based on extensive research, Ballard and his team conducted several sweeps of the ocean floor, finding no evidence of the wreck until the early morning hours of September 1, first seeing the Titanic’s massive boiler, then pieces of hull plating, portholes, and a railing turned on its side. Ballard returned to the site in July of 1986 and dove on the Titanic wreck in the manned submersible, Alvin with the small remote vehicle Jason Jr. deployed to investigate the interior areas Alvin couldn’t reach. It was during this second visit to the Titanic that Ballard placed a memorial plaque on the deck of the stern in memory of those who lost their lives in the tragedy. Robert Ballard returned to the site in the summer of 2004 to investigate any deterioration caused by later salvage operations and by nature.

Robert Ballard turned his research toward the many warships lost during WWII. In 1989 Ballard discovered the German warship Bismark, sunk by the British during a savage battle in the Atlantic during WWII. In 1992 Ballard explored Iron Bottom Sound off Guadalcanal, which holds the largest deep-water collection of sunken warships including the giant Japanese warship Kirishima. In 1993 Ballard explored the Lusitania’s wreck site using the ROV Jason as well as other research subs, confirming that the ship’s magazine remained intact and that the U-20’s torpedo penetrated a coal bunker, which ignited and exploded. More recently, in 2002, Ballard went in search of PT-109, commanded by John F. Kennedy in WWII.

Ballard’s most recent discoveries include the Mediterranean Sea finds of sunken remains of ships along ancient trade routes (1997), two ancient Phoenician ships off Israel, the oldest shipwrecks ever found in deep water (1999), and four 1,500-year-old wooden shipsâ€”one almost perfectly preservedâ€”in the Black Sea (2000). In 2003 he used satellite and Internet 2 technologies via the Immersion Project to bring thousands of students around the world into direct contact with his expedition team while on location in the Black Sea and Mediterranean Sea.

Founded in 1997 by Dr. Ballard, the Institute for Exploration in Mystic Connecticut has focused his attention on the development of a suite of remotely operated vehicles, including the ROV HERCULES, created specifically to conduct deep water archaeological excavation to professional archaeological standards. Designed by a team of engineers, archaeologists and marine geologists, HERCULES uses sophisticated manipulation, optical, and acoustic sensors. The HERCULES ROV was successfully field tested in the Black Sea in 2003.

Dr. Ballard is presently developing a joint M.A./Ph.D program in the new field of archaeological oceanography at the University of Rhode Island’s Graduate School of Oceanography. He is a member of the NOAA Science Advisory Board and serves as one of 16 Commissioners on the President’s Commission on Ocean Policy. Dr. Robert Ballard lives in Connecticut.