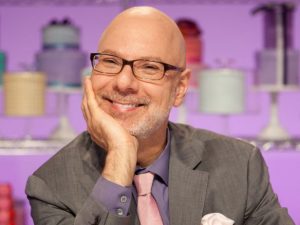 Ron Ben-Israel, the chef and owner of one of the country’s finest couture cake studios, started his confectionery adventures after a 15-year career as a professional modern dancer. Upon retiring from performing with companies spanning three continents, he used his art schooling and ballet training to master the discipline of pastry arts. After apprenticeships and engagements in Toronto and Lyon, France, Ron was led to New York City.

In 1996 his cakes were discovered while on display in the windows of Mikimoto on Fifth Avenue, and commissions quickly followed from Villeroy & Boch, Baccarat, De Beers, Bloomingdale’s and Bergdorf Goodman. In 1999 Ron established his flagship design studio and bakery in Manhattan’s fashionable SoHo neighborhood. In addition to an extensive list of private clients, many of New York’s premiere hotels are also devotees, including The Pierre, The St. Regis, The New York Palace, The Ritz-Carlton, The Waldorf Astoria, The Four Seasons and Mandarin Oriental. His cakes have been featured in destinations throughout the continental U.S. and abroad, and they continue to be a staple in the luxury industry.

Many books have celebrated his cakes, including Vera Wang on Weddings, Kate Manchester’s The Perfect Wedding Cake, Bette Matthews’ For Your Wedding: Cakes and Joan Hamburg’s City Wedding. He has also been fictionalized as a featured character in The New York Times’ best-selling novel Shopaholic Ties the Knot by Sophie Kinsella, and Zagat has published glowing reviews on Ron’s confections for the past 10 years. Some of Ron’s most-well-known cakes include The Plaza’s 100th birthday cake — an exact confectionery replica of the famed New York landmark measuring more than 12 feet tall and serving 1,500 guests as well as the trendsetting Sex and the City 2 cake in partnership with Swarovski.

Ron has served as both host and judge of Food Network’s Sweet Genius, and he is a judge on the series Cake Wars and Halloween Baking Championship. He has also has appeared as a guest and judge on a variety of Food Network shows, including Chopped, Guy’s Grocery Games and Worst Cooks in America. In addition to being on Food Network, Ron and his work have appeared on numerous television shows, including The Oprah Winfrey Show, Bravo’s Top Chef: Just Desserts and The Late Show with David Letterman (CBS).

Ron has traveled across the U.S. and internationally as a teacher, lecturer and motivational speaker. He is a popular headliner and guest at culinary and pastry conventions, as well as a featured speaker at fundraisers supporting a variety of causes. Ron also is the only Guest Master Pastry Chef at the renowned International Culinary Center in New York City, where he shares his passion, techniques and secrets with the students through exclusive demos. Ron is a proud member of City Harvest’s Food Council and its Advisory Board, which brings together more than 60 of New York City’s top chefs, restaurateurs and food industry professionals to aid the organization in the fight against hunger. Ron also is an active supporter of Lambda Legal Defense and is an advocate of same-sex marriage.