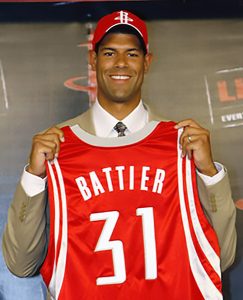 Basketball player, Shane Battier, was born September 9, 1978 in Birmingham, Michigan. He is a professional basketball player with the Houston Rockets and the U.S. national team.

Battier is a versatile player with the size to play inside and the range to score from further out (particularly the corner three-pointer). However, he makes his living as a hustle player on the defensive end, where he defends three positions (shooting guard, power forward, small forward) with a high degree of skill, nets a good number of blocks and steals, dives for loose balls, and frequently draws offensive fouls from his opponent.

Shane Battier has often been called “the ultimate glue guy” for playing sound, fundamental, team-oriented basketball, making his teammates more effective without flash or padding his own stats, and for making the most of his skills with discipline and hustle rather than raw athleticism.[1] He’s also known for his extensive preparation in studying the opposing team and the player he is assigned to guard: “I try to prepare for my opponent as thoroughly as possible. I want to know every angle on the man I am guarding to give me an edge. I read many, many pages and go over strengths and weaknesses many times before a game. Proper Preparation Prevents Poor Performance. That is a motto I like.”

On June 28, 2006, Battier was traded by the Grizzlies to the Houston Rockets in exchange for Stromile Swift and the Rockets’ number 8 selection Rudy Gay in the 2006 NBA Draft.

He played for the US national team in the 2006 FIBA World Championship, winning a bronze medal.