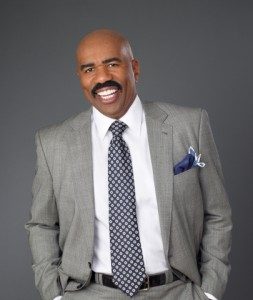 Steve Harvey is an Emmy Award winning TV personality, talk show host, actor and comedian. He currently serves as host of two popular TV shows for which he won Emmy Awards for in 2014: The Steve Harvey Show, which premiered in 2011, and the game show, Family Feud, which he began hosting in 2010. He has hosted the nationally syndicated radio show, The Steve Harvey Morning Show, since its inception in 2000.

Harvey is an active humanitarian and is involved in several communities across the country as well as national charities. He and his wife, Marjorie, founded The Steve and Marjorie Harvey Foundation in order to provide uplifting and educational opportunities for youth. Through the foundation they have launched several mentoring programs including The Steve Harvey Mentoring Program for Young Men and Girls Who Rule the World. As a partner with Walt Disney World, Harvey has created the annual Disney’s Dreamers Academy, a program mentoring teenage boys and girls, inspiring and exposing them to a number of job skills and career opportunities. For over 10 years, he has hosted The Neighborhood Awards, formerly known as the Hoodie Awards, his popular awards show honoring local businesses, religious/neighborhood leaders, churches, and high schools for their contributions as well as excellence within their own neighborhoods.