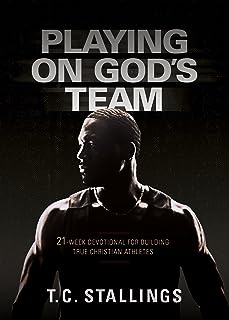 Starring in the 2015 hit movie “War Room”, T.C. Stallings is an actor, speaker, and author of “The Pursuit:14 Ways in 14 Days To Passionately Seek God’s Purpose For Your Life”

T.C.’s main mission is to use all of his gifts to share the message of Christ, and to encourage anyone who will listen to do the same. He is known for teaching in a very memorable, simple and easily digestible style, often using props, audience volunteers, and short videos to help illustrate the messages God gives him. As a result of simply being passionate about helping people connect with Jesus and understand His calling on their lives, T.C. has been platformed by God through many avenues including feature films, television commercials, sports modeling contracts, and speaking opportunities in and out of the country.

Before T.C. began his acting career, he enjoyed a stellar football career in the collegiate and professional ranks. After retiring from football in 2008, he set his sights on film and television. Success as an actor began in 2011 with his role as “TJ” in the movie “Courageous’. Following this great achievement, T.C. relocated to California and signed with a Christian agent. Six more movie roles would follow, along with 2 national commercials with the NFL and Golden Corral. TC has always strived to be successful, but not by way of spiritual compromise.

T.C. added “author” to his platform in 2015 after feeling led by the Lord to encourage everyone to pursue their God-given purpose above all else, prompting him to write “The Pursuit”. His new book released in the fall of 2015 through Broadstreet Publishing Group, .

T.C. is married to his college sweetheart, Levette Stallings, and has two beautiful children.