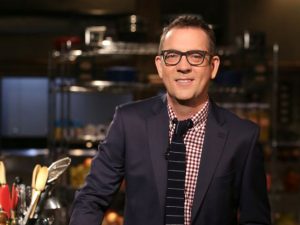 Emmy Award-winner Ted Allen is host of the hit prime-time competition series Chopped on Food Network, and a frequent contributor to The Best Thing I Ever Ate. He was a judge on the first four seasons of Bravo’s Top Chef and Food Network’s Iron Chef America, and was the food and wine specialist on the groundbreaking Bravo series Queer Eye. He is author of The Food You Want to Eat: 100 Smart, Simple Recipes (Clarkson Potter) — a collection of vibrant, all-natural dishes — and recently released In My Kitchen: 100 Recipes and Discoveries for Passionate Cooks. He also co-wrote the New York Times best-seller Queer Eye for the Straight Guy: The Fab Five’s Guide to Looking Better, Cooking Better, Dressing Better, Behaving Better, and Living Better.

Since 1997, Ted has been a contributing editor to Esquire magazine, where he writes about food, wine, style and everything else the American man needs to know. He was a finalist for a National Magazine Award for his Esquire feature on the little-known phenomenon of male breast cancer. Ted also writes for such publications as Bon Appétit and Food Network Magazine. Before joining Esquire, Ted was a senior editor and restaurant critic at Chicago magazine.

Ted volunteers his time to several national and local charities. The year 2011 marks his fourth year as spokesperson for Dining Out For Life, an annual fundraiser held on the last Thursday in April in which more than 3,000 restaurants donate a portion of the day’s proceeds to local AIDS service organizations. In 2010, Dining Out for Life raised more than $4 million in 50 cities in the United States and Canada. Ted also serves on the Culinary Council of the Food Bank for New York City and emcees GMHC’s annual Savor fundraiser.

Ted holds an M.A. in journalism from New York University, with an advanced certificate in the school’s Science and Environmental Reporting Program, and a B.A. in psychology from Purdue University. He lives in Brooklyn with his longtime partner, Barry Rice.