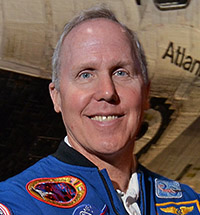 Thomas D. Jones, PhD, is a scientist, author, pilot, and veteran NASA astronaut. In more than eleven years with NASA, he flew on four space shuttle missions to Earth orbit. On his last flight, Dr. Jones led three spacewalks to install the centerpiece of the International Space Station, the American Destiny laboratory. He has spent fifty-three days working and living in space.

After graduation from the Air Force Academy, Tom piloted B-52D strategic bombers, earned a doctorate in planetary sciences from the University of Arizona, studied asteroids for NASA, engineered intelligence-gathering systems for the CIA, and helped NASA develop advanced mission concepts to explore the solar system.

Tom is the author of several current space and aviation books: Ask the Astronaut, Planetology, (written with Ellen Stofan), Hell Hawks! The Untold Story of the American Fliers Who Savaged Hitler’s Wehrmacht (with Robert F. Dorr), and Sky Walking: An Astronaut’s Memoir. The Wall Street Journal named Sky Walking one if its “Five Best” books on space.

Tom served on the NASA Advisory Council, and is a board member of the Association of Space Explorers and the Astronauts Memorial Foundation. As a senior research scientist at the Florida Institute for Human and Machine Cognition, he focuses on the future direction of human space exploration, uses of asteroid and space resources, and planetary defense. A frequent public speaker, he appears frequently on TV and radio with expert commentary on science and space flight.