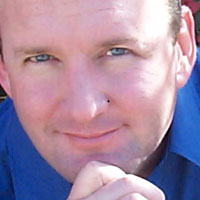 On November 12, 1992, Troy Evans was sentenced to 13 years in Federal Prison. He was convicted of five armed bank robberies, in three states, over a six-month crime spree, and was sent to the Federal Correctional Complex in Florence, Colorado. His neighbors included such notorious criminals as Timothy McVeigh and Terry Nichols. Troy was released on December 13, 1999, over seven and one-half years later.

Despite the obstacles that only prison can produce, Troy was determined that his time behind bars would not be wasted time. Education would be his saving grace. After six months of filling out applications, writing essays, begging, pleading, and selling, Troy landed his first scholarship for one class. That was a beginning, and when Troy walked out the doors of prison he carried with him two degrees, both obtained with a 4.0 GPA and designation on the Dean’s and President’s list.

Troy is now a motivational speaker who shares his story and lessons learned with audiences of all ages. Since his release, Evans has taken the Corporate, Association and Education platforms by storm with his motivational keynote speeches. Audiences are stunned by his endurance, accomplishments and remarkable personal transformation. With straightforward, real life examples, Evans shows how the keys to his success in prison are the keys to his success today, and how these lessons can be applied to escaping the “prisons within ourselves”. He renews an appreciation for what is really important in all of our lives and motivates each and every person to overcome adversity, adapt to change, and to realize their full potential.

With young people, Evans speaks openly on the dangers of drug use, peer pressure and the power of responsible decision-making. His student motivational speaking grabs the attention of today’s youth by sharing what he witnessed within the harsh environment of a Federal Prison and illustrates how his years of incarceration can be linked to the decisions he made as a teenager. Teen audiences are left with a wide-eyed understanding of “consequence” and a realization that the decisions they make today have the potential to alter their entire life.